The Individual Disengagement of Avengers, Nationalists, and Jihadists 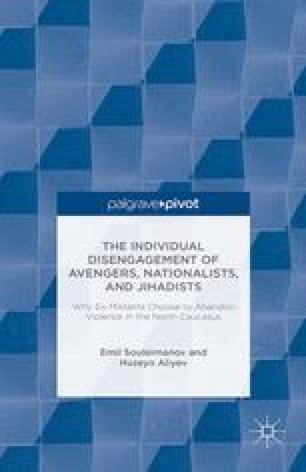 The Individual Disengagement of Avengers, Nationalists, and Jihadists pp 44-59 | Cite as

This chapter introduces two case studies examined in this book — the North Caucasian republics of Chechnya and Dagestan. While the first part of the chapter undertakes a journey into history and ethnography of these two republics, the second part guides readers through the decades-long armed conflict in the region. From the start of the First Chechnya War in 1994 to the current Caucasus Emirate-led insurgency, this chapter allows the reader to grasp the particular historical, geo-political, and socio-cultural conditions which have led to the birth and proliferation of insurgent groups in the contemporary North Caucasus.

Terrorist Attack Male Relative Insurgent Group International Crisis Group North Caucasus Region
These keywords were added by machine and not by the authors. This process is experimental and the keywords may be updated as the learning algorithm improves.
This is a preview of subscription content, log in to check access.