Politics and Legitimacy in Post-Soviet Eurasia 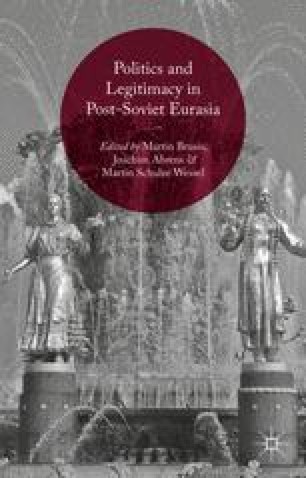 Concepts of the Nation and Legitimation in Belarus

The durability of authoritarianism in Belarus is an anomaly by world standards. Various studies have noted that Belarus’s regime has significantly exceeded the average lifespan of comparable authoritarian regime types elsewhere around the globe. In July 2014, the Belarusian political regime had outlived the average comparable political regime by between 1 and 17 years, depending on the definition of such regimes.1 This stability is particularly puzzling in the regional post-communist context, where electoral protests toppled authoritarian incumbents in Slovakia, Croatia, Serbia, Georgia, Ukraine and Kyrgyzstan (see Bunce and Wolchik, 2011; Hale, 2015).2 Belarus too has experienced conditions apparently advantageous for democratization, including an opposition that has tried to imitate successful mobilization strategies from other countries, popular support for democracy, a relatively high level of economic development, a skilled workforce and geographical proximity to Europe. Despite circumstances similar to those in countries that have overthrown authoritarian regimes, Belarus’ trajectory has diverged from that taken in Ukraine (Burant, 1995; Kuzio and Nordberg, 1999; Korosteleva, 2004; Way, 2010).

National Identity Presidential Election Nation Concept National Unity World Value Survey
These keywords were added by machine and not by the authors. This process is experimental and the keywords may be updated as the learning algorithm improves.
This is a preview of subscription content, log in to check access.