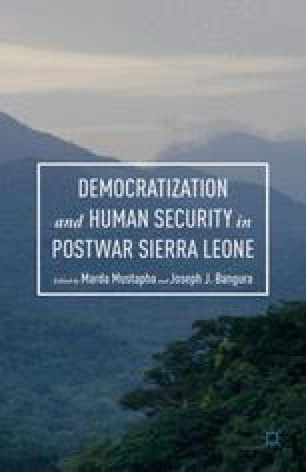 Conclusion: The Interface between Democratization and Human Security

Since the end of the Cold War in the 1990s and the cascade of events that followed, many African countries like Sierra Leone were forced to pivot from despotic order, repression, and dictatorship to democratization and human security with the aim of achieving political and economic renaissance (Diamond and Plattner 2009). In fact, the political milieu created in many African countries such as Sierra Leone by events that accompanied the fall of communism and the Berlin Wall led Colin Legum to boldly proclaim on the eve of the new millennium that “the momentum of democratization and the clamor against human rights abuses will be maintained, so that, by say, 2015, the great majority of African states will have adopted viable democratic institutions.”1 It is obvious that such a prediction was premature and overly optimistic. Others have observed that though many African states embarked on the process of democratization, very few were able to strengthen the “formal structures” of democracy (Joseph 2009). Clearly, many African postwar nations like Sierra Leone still struggle to create and maintain institutions that uphold the rule of law, foolproof electoral systems, viable civil society, and an independent judiciary, among others (Diamond and Plattner 2009).

African State Human Security Democratic Transition Health Care Infrastructure Independent Judiciary
These keywords were added by machine and not by the authors. This process is experimental and the keywords may be updated as the learning algorithm improves.
This is a preview of subscription content, log in to check access.