International Teaching and Learning at Universities 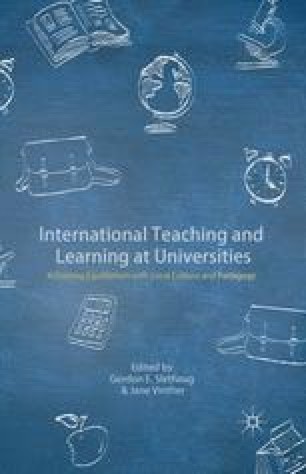 International Teaching and Learning at Universities pp 1-10 | Cite as

Over four million university students go abroad annually to study, roughly the same number that attend the international campuses of American and British universities as well as those from other countries, and an additional five million students attend international secondary schools at home or abroad. International education has become a fixed reality for universities and schools in such native English-speaking countries as the United States, the United Kingdom, Australia, and Canada, but also increasingly in large non-native English-speaking countries, such as China, France, Germany, Russian Federation, Japan, Italy, and Malaysia (see table 1.1 for the top ten countries involved).1 It has also become important to smaller Scandinavian countries where English is not native, but is spoken with relative ease and proficiency by the majority of the population. Then, too, international education has become big business, generating billions of dollars, pounds, renminbi, kroner, and other currencies to assist universities and local businesses in the host countries.

International Student Chinese Learner Liberal Education International Education Student Mobility
These keywords were added by machine and not by the authors. This process is experimental and the keywords may be updated as the learning algorithm improves.
This is a preview of subscription content, log in to check access.