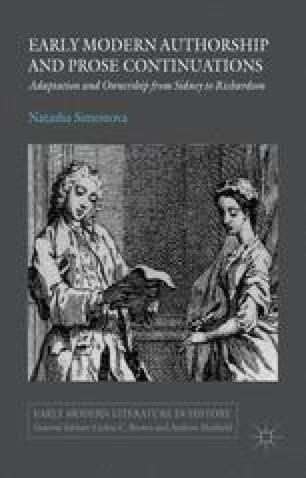 Introduction: Works of Another Hand

Despite Dr Johnson’s pronouncement, the number of seventeenth- and eighteenth-century books that were ‘wished longer’ by their readers considerably exceeded this list of three. Many of those readers, in fact, went beyond wishing by actually writing continuations to the texts they read, adapting the characters, settings, and plots in order to tie up loose ends or tell further stories. This meant that it was, indeed, occasionally difficult to ever reach the ‘last page’ of a popular work, or to decide who ought to have the ‘last word’ about what those pages ought to contain.

Eighteenth Century Source Text Early Modern Period Fictional World Literary Property
These keywords were added by machine and not by the authors. This process is experimental and the keywords may be updated as the learning algorithm improves.

Alas, Madam! (continued he) how few books are there of which one ever can possibly arrive at the last page! Was there ever yet any thing written by mere man that was wished longer by its readers, excepting Don Quixote, Robinson Crusoe, and the Pilgrim’s Progress?