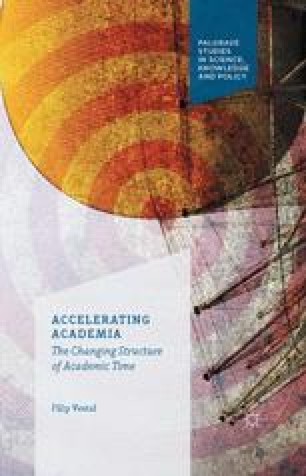 Is acceleration an unprecedented and defining feature of modernity? Or only of late modernity? Is it a sole effect of modern capitalism? Do we live in an ever-accelerating world? If so, what are the social, cultural, psychological, political and ethical implications? In the last two decades a lively debate has emerged around social acceleration as an object of systematic social scientific enquiry and these questions have preoccupied a number of contemporary commentators. Particular attention has been devoted to the investigation in three major and intertwined areas associated with this theme: (1) the implications of the individual and social experience of ‘living in a fast-changing world’; (2) the temporal structures of modernity and associated temporal politics; and (3) the cultural significance of acceleration. This chapter surveys the existing acceleration scholarship and sets the general framework for subsequent analysis.

Critical Theory Machine Speed Cultural Significance Emphasis Original Modern Capitalism
These keywords were added by machine and not by the authors. This process is experimental and the keywords may be updated as the learning algorithm improves.
This is a preview of subscription content, log in to check access.