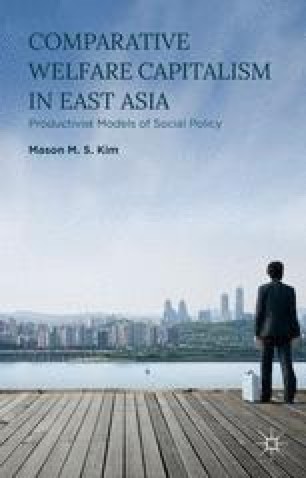 During the initial years of the Cold War period, the primary concern among political leaders in many East Asian countries was how to build a nation from the ground up to strengthen their political position. While the perceived dire threat from the newly established communist regimes heightened the concern for state building in the capitalist bloc, the presence of communist forces also helped East Asian military dictatorships legitimize their authoritarian rule and shape the prevailing pattern of East Asian capitalism. In Korea, for example, the military regime under Park Chung-Hee began to intervene in virtually all spheres of the economy and society in the 1960s. The state, with a highly centralized apex with absolute powers of legislation and execution, set rapid industrialization as the central task to develop a strong economic base for confronting communist North Korea (Kohli 2004). The authoritarian regime established in Taiwan after the 1949 Chinese Civil War was very much in the same position as Korea. During the 1950s and well into the 1960s, the Cold War played a central role in the development of the political institutions and economic structure. The authoritarian Kuomintang regime dictated almost all aspects of the society, as well as the economy, from the allocation of capital to the regulation of trade (Stubb 2005, pp. 99–103).

Social Protection East Asian Country Social Security System East Asian Economy Social Insurance Program
These keywords were added by machine and not by the authors. This process is experimental and the keywords may be updated as the learning algorithm improves.
This is a preview of subscription content, log in to check access.