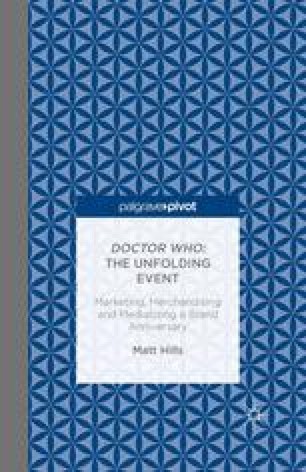 Doctor Who: The Unfolding Event — Marketing, Merchandising and Mediatizing a Brand Anniversary pp 56-79 | Cite as

This chapter considers how Doctor Who’s anniversary underpinned a wide range of merchandise. Such material might be viewed as corroding the BBC’s public service remit, but I argue instead that “public service consumption” has formed an important part of Who’s history — fans’ decommoditization of merchandise has aided in cementing audience affection for the BBC’s distinctiveness. I also examine how the ExCeL “Celebration” was saturated in memory discourses, with merchandising being pre-decommoditized as “souvenirs”. Merchandise acutely raises the work of para-paratexts, given that its paratexts are themselves framed by books such as The Vault, commemorative brochures, or fan reviews. I conclude by addressing how the BBC’s public service brand was disrupted by glitches in capitalist realism such as BBC Worldwide licensees going out of business.

Cite this chapter as:
Hills M. (2015) Merchandising the 50th Anniversary — Public Service Consumption in the Name of the Doctor. In: Doctor Who: The Unfolding Event — Marketing, Merchandising and Mediatizing a Brand Anniversary. Palgrave Pivot, London. https://doi.org/10.1057/9781137463326_3