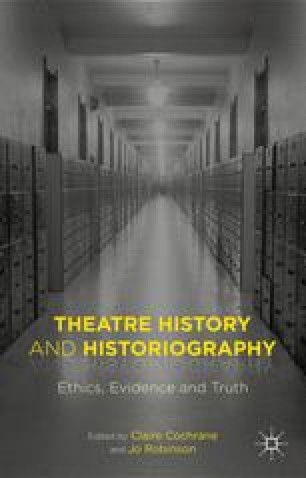 October 2006. An audience of about a hundred gathered at a venue in Cardiff, Wales, on the occasion of the first in a series of conversations — under the title ‘An Oral History of Performance Art in Wales’ — for which I invited artists to revisit key moments in Wales’s post-war neo-avant-garde past.1 On a small stage in front of a screen I sat with Ivor Davies, one of the country’s foremost painters and in the 1960s a protagonist of event-structured ‘Destruction in Art’, to talk about his Adam on St Agnes’s Eve, staged in Swansea in 1968 as an early Welsh example of a multi-medial Happening-style work, which featured the artist’s trademark explosives.2 During our conversation we made repeated reference to documentation selected from Davies’s archive, which was projected onto the screen behind us as both illustration and memory prompt (see Figure 9.1). Among the documents was a detailed score for the piece and a five-minute-long, silent, black-and-white film of its Swansea realisation:

Ivor Davies [ID] I’ve kept all sorts of things from that event, even the tickets, an obsessive sort of collection of things. [Points to a handwritten score that he holds in his hands.] Here is a score which lists the sound, the cues, the explosions and the timing of the explosions, the lighting, the projections, the performers, the actions and props, other objects that were used, and then times it exactly. […] [Turns to the screen, on which a black-and-white film appears.]

Oral History Audience Member Representational Strategy Performance Documentation Oral History Interview
These keywords were added by machine and not by the authors. This process is experimental and the keywords may be updated as the learning algorithm improves.
This is a preview of subscription content, log in to check access.