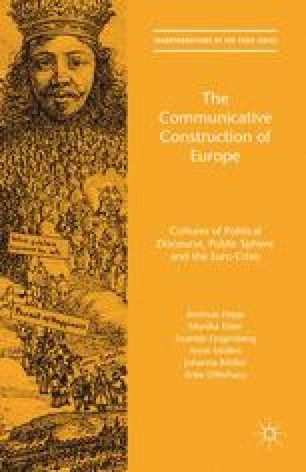 The Communicative Construction of Europe pp 1-12 | Cite as

Chapter
Part of the Transformations of the State book series (TRST)

The euro crisis, as it is widely known, has been an important focus for media coverage both within Europe and beyond. Since 2009 we have been confronted with an ongoing discourse dramatising the crisis surrounding the euro in Europe and the EU. In 2003 The Sun was already writing about the ‘EU in crisis’ (12 December 2003) — a discourse that intensified when the financial crisis erupted. On 13 December 2008, for example, the German Bild talked of a ‘crisis domino-effect’, reflecting ongoing problems with the eurozone currency and financial politics in general. In Poland, one could read on 13 December 2008 that the member states of the EU should ‘jointly struggle with the crisis’ (Dziennik Zachodni). And in France, Ouest France called upon ‘the state to rescue the crisis’ (25 March 2008), while Le Monde anticipated that ‘in Southern Europe, the crisis further weakens confidence in the state’ (7 May 2013). More recently, on 4 November 2014 the Polish Gazeta Wyborcza agreed with politicians that ‘the euro crisis has not been solved’, asking what could be done. The German Spiegel Online calculated on 6 January 2015 that the euro crisis had ‘destroyed 3.8 million jobs’. All in all, this throws up more questions than answers. Is the EU really under so much pressure? Do we risk the derailment of European integration? And is a process of re-nationalising Europe taking place, with the state acting the part of a trouble shooter? How can we interpret the various forms of Euroscepticism?

Media Coverage Public Sphere Political Discourse Communicative Space Communicative Construction
These keywords were added by machine and not by the authors. This process is experimental and the keywords may be updated as the learning algorithm improves.
This is a preview of subscription content, log in to check access.