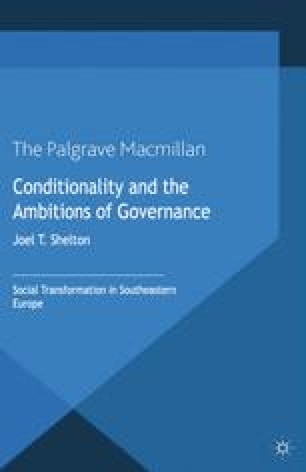 Conditionality and the Ambitions of Governance pp 1-26 | Cite as

As late as 2013, Europe was said to be in crisis. The future of the euro was in doubt, threatened by bank bailouts and sovereign debt. Recession rocked the continent, helped along by austerity measures that generated social unrest, and newspapers declared the future of the European Union (EU) itself to be imperiled. Coverage of such disorder in European affairs suggested that the period since late 2009 — when the Greek government first announced the state had been grossly under-reporting its budget deficit — had been something of an aberration; a formerly harmonious Europe had been ripped asunder by bad assets, overleveraged banks, public bailouts, and profligate spending. Yet from another vantage point, crisis — and anxious anticipation of the next crisis — has been the very stuff of European Union. Crisis re-made the idea of ‘Europe’, and it is fear of crisis — particularly anxieties about the political, economic, and social cohesion of the continent following the collapse of communist states in the east — that has rationalized the functional and geographic expansion of the Union. Crisis propels the ‘European project’ haphazardly forward. Disharmony is an invitation to governance.

European Union Political Economy Human Resource Development Candidate State Subjective Dimension
These keywords were added by machine and not by the authors. This process is experimental and the keywords may be updated as the learning algorithm improves.
This is a preview of subscription content, log in to check access.