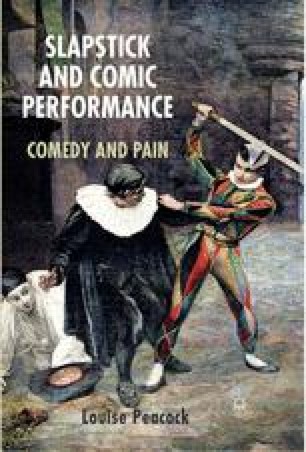 This chapter considers a range of examples in which real pain is given a performance frame either in the way that the instances of pain are filmed or in the way they are presented after the event. The ways in which they are presented create a comic frame through which they can be judged as examples of slapstick. Techniques used to do this, which will be explored more fully in this chapter, include commentary, onscreen audience, camera techniques and physical reactions to pain such as tripping falling, grimacing and screaming. Many of the examples are either self-inflicted or accidental which, judging from examples considered in earlier chapters, would seem to diminish or negate a consideration of morality. What I seek to do here is to explore how the nature of and responsibility for making moral judgements implicates the audience as part of the exchange of real pain for entertainment. To what extent does the audience’s willingness to be entertained by incidents of real pain demand a moral judgement be passed on the audience as much as on those within the performance frame?

Moral Judgement Comic Performance Television Show Performance Frame Television Audience
These keywords were added by machine and not by the authors. This process is experimental and the keywords may be updated as the learning algorithm improves.
This is a preview of subscription content, log in to check access.