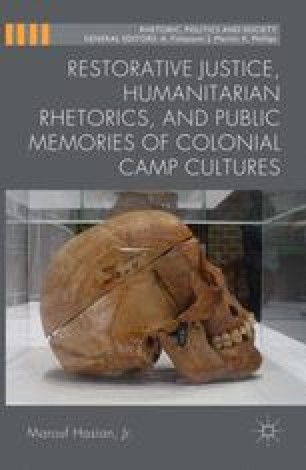 (Post)colonial Presents and International Humanitarian Futures: Remembering the Age of the Colonial Camps

In 2004 the German minister of economic cooperation and development, Heidemarie Wieczorek-Zeul, a member of the Social Democratic Party, visited Namibia and attended a Herero ceremony at Okakarara that commemorated the beginning of the colonial war that led to what the Hereros call Otjitiro Otjindjandja (a period of time when “many people died in one place”).3 As she invoked parts of the Lord’s Prayer, she argued that “without a conscious process of remembering, without sorrow, without apology, there can be no reconciliation.”4

Restorative Justice Concentration Camp Blue Book Military History Public Memory
These keywords were added by machine and not by the authors. This process is experimental and the keywords may be updated as the learning algorithm improves.

Now the air is filled with phantom shapes, It’s hard to see how anyone escapes …

The angel would like to stay, awaken the dead, and make whole what has been smashed…. The storm irresistibly propels him …. This storm is what we call progress.2