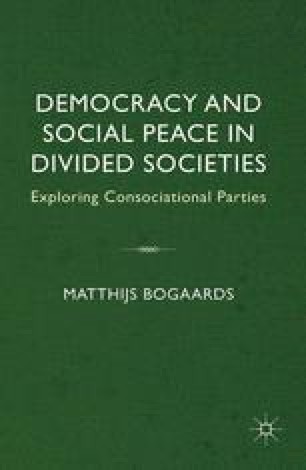 There is little doubt that the interim constitution that helped South Africa’s transition to an inclusive polity contained power-sharing arrangements.1 However, the permanent constitution and the departure of the National Party (NP) from the Government of National Unity (GNU) in 1996 weakened political accommodation in this plural society. When the African National Congress (ANC) established itself as the dominant party, some observers put their hope in the ANC becoming more inclusive and participatory. This development can be conceptualized as the transformation of a standard form of consociationalism among different parties, each representing their own community, to consociationalism within one, consociational, party. This chapter examines the record of the ANC as a consociational party that within itself represents and accommodates the country’s diversity. It looks at party organization, internal representation, and internal accommodation of socio-cultural differences within the context of the dominant position of the ANC in the wider political system. The conclusion will be that the ANC appears even more negatively disposed to internal consociationalism than it has been to interparty consociationalism, pointing at the possibility of a long-lasting political marginalization of minority interests.

Grand Coalition African National Congress National Party Power Sharing Dominant Party
These keywords were added by machine and not by the authors. This process is experimental and the keywords may be updated as the learning algorithm improves.
This is a preview of subscription content, log in to check access.