The Un/Making of Latina/o Citizenship 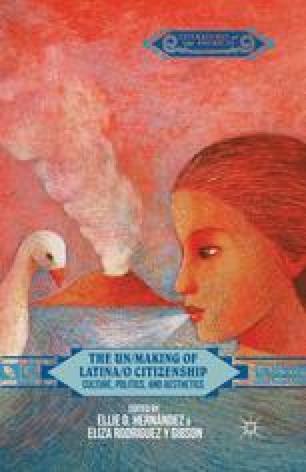 The Latina/o experience, a necessary cultural and political fiction, is nothing if not varied and complex—created by media, academic discussions, and grassroots politics alike. This space of contradiction informs the present project and provides us with major and critical points of convergence for engaging the aesthetics, the politics, and the culture of citizenship—a term that encompasses far more than its legal meaning might suggest. The matter of Latina/o citizenship has been taken up in the twenty-first century with such profound exuberance across the political spectrum that it is time to consider its critical role in mapping out the difficult terrain of contemporary cultural politics and its aesthetics for the twenty-first century. Initially, we thought this project would clarify the trajectory of Latina/o experiences through the concept of citizenship as it currently stands, especially in the decade after 9/11 and the consuming cultural aftermath of two major wars. Instead, what has emerged is decidedly less linear and far more interesting—a simultaneous unmaking and remaking of citizenship has become a way of thinking about community, belonging, culture, and nation.