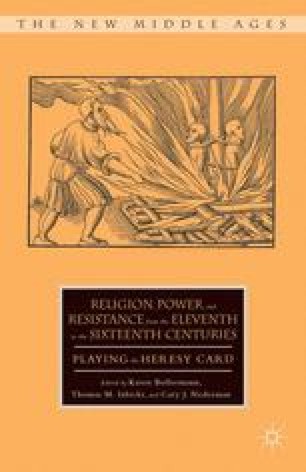 Religion, Power, and Resistance from the Eleventh to the Sixteenth Centuries pp 13-36 | Cite as

Standing in Abelard’s Shadow: Gilbert of Poitiers, the 1148 Council of Rheims, and the Politics of Ideas

The recent study of heresy in the Latin Middle Ages has stood largely under the long shadow cast by R. I. Moore’s influential thesis concerning “the formation of a persecuting society.”1 Briefly stated, Moore hypothesizes that the growing concentration of power in both ecclesiastical and secular institutions during the twelfth and thirteenth centuries, characterized by emergent legalism and an attendant coercive apparatus, yielded a single-minded effort across Europe to “normalize” religious belief and practice. “New” heresies were discovered, denounced, and ruthlessly stamped out as a result of a concerted and coordinated effort by clerical and temporal authorities to enforce orthodoxy on a scale inconceivable in earlier times.2 For Moore, the push toward a “persecuting society” thus constituted a relentless and inexorable process of imposing doctrinal discipline, a sort of faith-based precursor to Weber’s “iron cage” of rationality.3

Communal Government Present Chapter Private Gathering Secular Institution Rational Disputation
These keywords were added by machine and not by the authors. This process is experimental and the keywords may be updated as the learning algorithm improves.
This is a preview of subscription content, log in to check access.