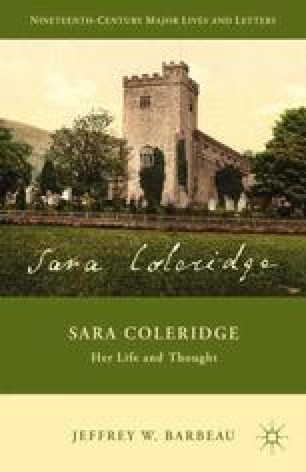 Sara’s frustration with Tractarianism grew with each passing day. When she published her “Introduction” to Biographia Literaria (1847), she refused to limit her comments to her father’s plagiarisms alone. Instead, Sara developed ideas that she first expressed in On Rationalism (1843). She not only defended her father’s reputation and traced his plagiarisms, but also explained the implications of his religious philosophy against Tractarians who either likened his ideas to German skepticism or co-opted his writings for the promotion of Anglo-Catholic doctrine. Sara portrayed her father as heir to the German Reformation and one who walked a middle way between the heroic Reformer Martin Luther and the towering philosopher Immanuel Kant.

Privy Council Spiritual Change Religious Philosophy Regeneration Dialogue Divine Presence
These keywords were added by machine and not by the authors. This process is experimental and the keywords may be updated as the learning algorithm improves.

Do reason or Scripture command us to abandon self absolutely? I cannot see this—I seem to myself to see the contrary … It is not surely to annihilate each man’s distinct and individual being that he is united with Christ—but to raise, toglorify it—to destroy in him every thought that wars against God.