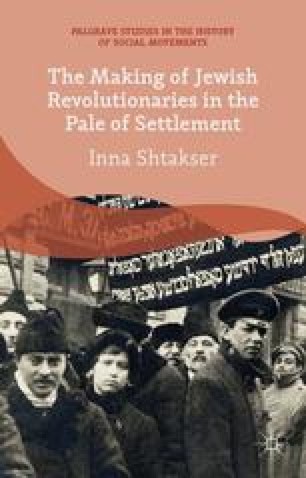 The Emotional Experience of Revolutionary Activism

While historians have dealt with the process of radicalization of the Pale of Settlement working-class Jews as an intellectual process, I argue that viewing radicalization as an emotional process will add much to our understanding of the phenomenon of radicalization as a whole. Similar feelings were experienced differently before and after radicalization, and these feelings, enhanced by socialist and anarchist ideologies and the weakening of the traditional Jewish community, created the type of working-class militant so prevalent in the Jewish society of the Pale. By feelings (or emotions) in this work I refer to emotional practices in the sense of William Reddy’s ‘emotives’, that is socially determined performative practices.1 Thus any non-analytical experience and expression, while socially determined and therefore historical, would constitute a relevant object for this study. I do use feelings and emotions interchangeably here since I agree with Monique Scheer that bodily practices are no less socially determined than non-analytical verbal practices and therefore a clear differentiation between the two confuses rather than clarifies the issues at hand.2 The term ‘structure of feeling’ is particularly convenient since it specifically addresses the non-analytical socially determined expressions in the context of a historical development.

Emotional Experience Activist Structure Jewish Community Emotional Community Revolutionary Movement
These keywords were added by machine and not by the authors. This process is experimental and the keywords may be updated as the learning algorithm improves.
This is a preview of subscription content, log in to check access.

Cite this chapter as:
Shtakser I. (2014) The Emotional Experience of Revolutionary Activism. In: The Making of Jewish Revolutionaries in the Pale of Settlement. Palgrave Studies in the History of Social Movements. Palgrave Macmillan, London. https://doi.org/10.1057/9781137430236_5