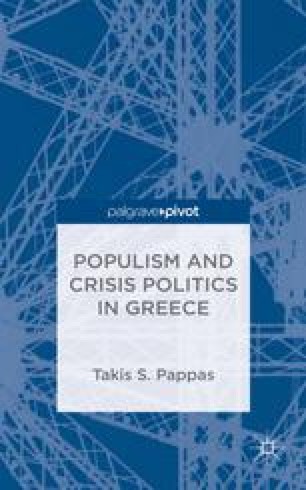 Populism and Crisis Politics in Greece pp 33-42 | Cite as

In the aftermath of the failure of Constantine Mitsotakis’s government (1990–1993) to reinstitute liberalism, populism became broadly seen as the best vote-catching strategy, thus effectively contaminating Greece’s political and party systems. The country developed into a populist democracy, a democratic subtype in which all major parties, whether in government or in opposition, are, and behave as, populist. Populist dominance rests on three biased beliefs that became systematized after the 1980s: the anti-market bias; the anti-foreign bias; and the anti-institutional bias.

Political Liberalism Major Party Sovereign Debt Crisis Populist Parti Crisis Politics
These keywords were added by machine and not by the authors. This process is experimental and the keywords may be updated as the learning algorithm improves.
This is a preview of subscription content, log in to check access.