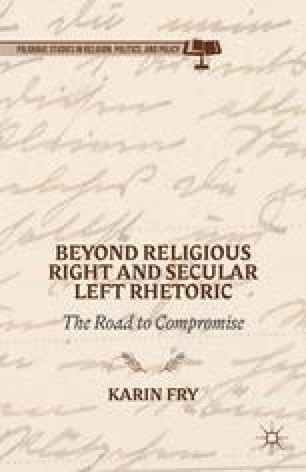 It is clear that in the United States today, much of the media discourse supports the view that there is an unbridgeable rift between Christian conservatives and liberal secularists in the United States. As we have seen, this is a far too simplistic view that tends to mischaracterize the stated opinions of the opponents and homogenize the varieties of Christians, seculars, and other religious and nonreligious Americans. Political pundits have reinforced the division between Christian conservative and secular perspectives regardless of the fact that not all progressives are non-Christian and not all religious persons are Christian or conservative. This erroneous media-framed binary opposition between the right and the left continues to inform many citizens’ viewpoints. However, by tracing the philosophical history of some of the concepts associated with present-day views about the relationship between Christianity and politics, a surprising conclusion emerges.

Religious Belief Common Origin Religious Freedom Civil Religion Religious Toleration
These keywords were added by machine and not by the authors. This process is experimental and the keywords may be updated as the learning algorithm improves.
This is a preview of subscription content, log in to check access.

Cite this chapter as:
Fry K. (2014) The Common Origins of the Right and the Left on Church and State. In: Beyond Religious Right and Secular Left Rhetoric. Palgrave Studies in Religion, Politics, and Policy. Palgrave Macmillan, New York