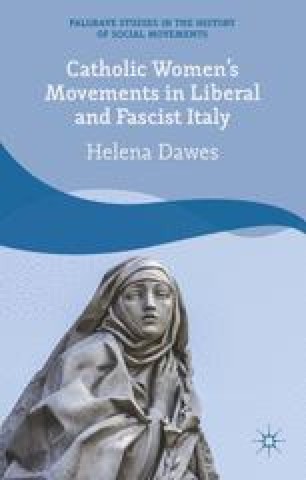 In Liberal and Fascist Italy the extensive network of Catholic women’s organizations provided the Catholic Church with a vital link to civil society, and for this reason the Vatican hierarchy devoted it constant attention. With the emergence of early Catholic feminism, the irreconcilability of the patriarchal values of the Church and women’s quest for equal rights soon became evident, leading to a split in the Catholic women’s movement and the suppression of its feminist current in the context of the disbandment of early Christian democracy and Pius X’s anti-modernist campaign. Henceforth the two new Church-sponsored conservative women’s organizations, the Unione fra le donne cattoliche d’Italia and the Gioventù femminile, were instrumental in fervidly promoting the official anti-feminist line and slowing down the momentum towards women’s suffrage in Liberal Italy. When, after World War I, universal female suffrage became a distinct possibility, rather than looking forward to it as a positive step towards improving women’s lives, they tended to prejudge it as an awkward imposition.

Italian Society Vital Link Catholic Woman Gender Policy Religious Marriage
These keywords were added by machine and not by the authors. This process is experimental and the keywords may be updated as the learning algorithm improves.
This is a preview of subscription content, log in to check access.