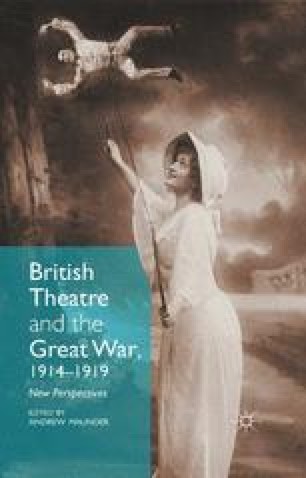 The Theatre of the Flappers?: Gender, Spectatorship and the ‘Womanisation’ of Theatre 1914–1918

Seven months after the Armistice, St John Ervine, writing on the deplorable state of the post-war British theatre, expressed the belief that it was all the fault of ‘the flappers2 and the aged gentlemen who loved “Hilloa Twaddle!”’ He exonerated the soldier who, ‘being a good-natured man, went to see those appeals to the immature and the senile simply to humour [the] civilians’.3 Ten years later Ervine was describing the ‘womanisation’ of theatre as the greater of the two threats that theatre had suffered since its hey-day before the Great War.4 Fellow critic, Frank Vernon, went further in his condemnation of female spectator-ship in his 1924 overview of a British theatre that he claimed had been ‘butchered for the War-time flapper’. In a lengthy diatribe he argued that the war-time theatre ‘reflected accurately the spirit of the times and deteriorated progressively as the deadly years went on, in ideals and all the finer things’ and asserts that ‘while the men on leave came and went, [the Flapper] remained, helping one soldier after another to spend his money on the entertainment she chose’. She was ‘an excited, uneducated young person who couldn’t be bothered to listen to a play unless it had melodrama and jejune sentimentality in slabs; she knew it was a jolly War, because it bought home men in uniform, and that thrilled her sexually’.

Daily Mail Sexual Autonomy Home Front Deplorable State European Theatre
These keywords were added by machine and not by the authors. This process is experimental and the keywords may be updated as the learning algorithm improves.

She’s ubiquitous in theatres, in rail and ‘bus and tram, She wears her ‘blouses open down to the diaphragm.’ And instead of realising what our men are fighting for She’s an orgiastic nuisance who in fact enjoys the War.

Of all changes wrought by the War, none has been greater than the change in the status and position of women, and yet it is not so much that woman herself has changed as that man’s conception of her has changed.