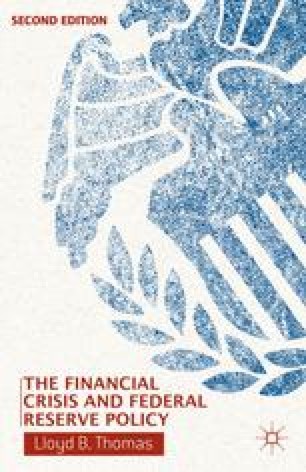 Federal Reserve policy in the Great Depression of the early 1930s was analyzed in chapter 10 and was found to be very poorly conceived and conducted. Serious errors committed by the Fed include permitting bank reserves to decline significantly during banking panics, sharply raising interest rates in 1931 after Britain abandoned the gold standard, sterilizing gold inflows that would otherwise have expanded bank reserves and the monetary base, abruptly reversing course in mid-1932 after implementing a short-lived expansionary policy of open market security purchases, and doubling reserve requirements in 1936 and 1937. In this chapter, the conduct of Fed policy during the Great Crisis of 2007–2009 is analyzed.

Federal Reserve Monetary Base Interbank Market Federal Open Market Committee Commercial Paper
These keywords were added by machine and not by the authors. This process is experimental and the keywords may be updated as the learning algorithm improves.
This is a preview of subscription content, log in to check access.