The Formation of Civil Society in Modern Iran 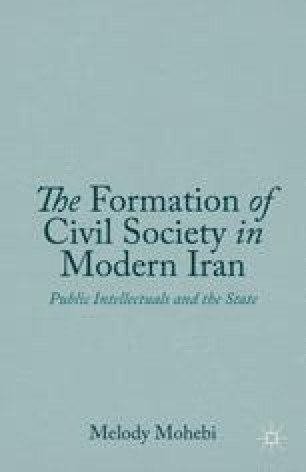 Expanding on why and how social actors use the concept of civil society to enhance their positions of power vis-à-vis the state and society at large, this chapter looks at the more typical, conventionally recognized civil society “practitioners.” By the start of the second Khatami administration in 2001, activists and observers were increasingly disappointed with the outcome of reformist efforts, namely with the failure to create sustainable and effective organizations and policies that gave security to what they considered to be a modern civil society sphere. However, less credit than deserved was given to the reality that the aforementioned practitioners had gained experiences and become part of a more vocal public, developments that were not possible to simply reverse with a change in government. This chapter looks at how the civil society frame promoted by reformist intellectuals and the political opportunities created once reformists entered power were taken up by individuals who considered themselves agents of a modern civil society. The term “modern” implies association with liberal ideals of individual autonomy and accountability of the governing state.

Civil Society Political Party Student Activist Civil Society Organization Reform Movement
These keywords were added by machine and not by the authors. This process is experimental and the keywords may be updated as the learning algorithm improves.
This is a preview of subscription content, log in to check access.

Cite this chapter as:
Mohebi M. (2014) The “Practitioners” of Modern Iranian Civil Society. In: The Formation of Civil Society in Modern Iran. Palgrave Macmillan, New York