The United Nations and Terrorism 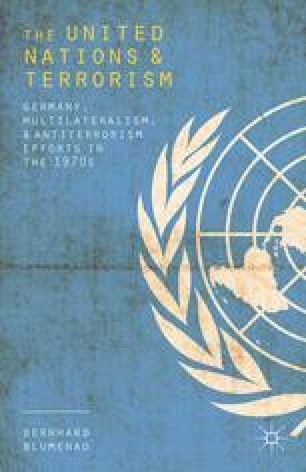 The United Nations and Terrorism pp 14-39 | Cite as

Domestic Terrorism in Germany in the 1970s

In the mid-1960s a spectre was haunting the West, the spectre of revolution. Almost all of the countries in Western Europe and North America experienced a previously unknown wave of civil protests — mostly by students — that attacked conventional societal norms and strove for reform.1 Within a few years, domestic tensions caused by the global phenomenon of civic rebellion intensified in many countries of the world:

By 1968 rebellion produced revolution. Young men and women took to the streets, smashing symbols of government legitimacy. In Berkeley, Washington, D.C., and other American cities mobs blocked buildings, burned streets, and fought with the state’s armed police and military forces. In West Berlin and Paris, students built barricades and engaged in street battles with police. In Prague, men and women demonstrated for freedom and independence from Soviet intervention. In Wuhan young Red Guards seized weapons from the army and used them against their elders. This was a truly ‘global disruption’ that threatened leaders everywhere.2

Terrorist Group German Democratic Republic German Government North Atlantic Treaty Organization Guerrilla Warfare
These keywords were added by machine and not by the authors. This process is experimental and the keywords may be updated as the learning algorithm improves.
This is a preview of subscription content, log in to check access.