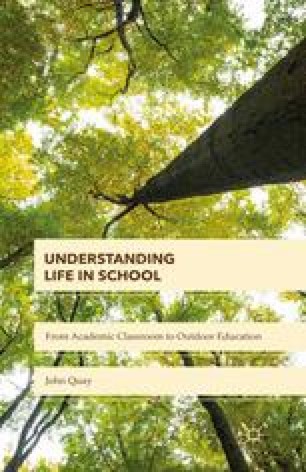 The beginning of camp was the beginning of the opportunity to be a school camper again — as on previous school camps. But this was a new camp and a new class, and being-a-school-camper offered new possibilities, even though these were similar to previous versions. This beginning occurred before we actually headed off in the bus for camp, in the preparation that was undertaken at school, although this was minimal. There was information about clothing and equipment that needed to be sourced from home, and informal discussions with others who had already been on this year ten camp. Of all the year level camps, this one was reputed to be better than the rest, better than all those experienced in previous years. “Everyone was pretty high,” Bill told me afterwards. “We were all looking forward to everything. We’d been told before we came that it was going to be the best camp.” When I asked him who had told him, he revealed that it was “everyone who has been.” I had thought he meant only the year ten students from other classes, but no. “My sister told me,” he said. “She’s in year twelve.” Thus we all boarded the bus with high hopes as we embarked for camp, although for some the mood of expectation was more “hope” than “high.” There were 29 year ten students, Ms Dickson (all names are pseudonyms) — who did not normally teach this class but had volunteered to attend as visiting teacher — and me. We were to meet the outdoor education staff when we arrived at camp.

Peanut Butter Base Camp Joint Purpose Massage Line School Camp
These keywords were added by machine and not by the authors. This process is experimental and the keywords may be updated as the learning algorithm improves.
This is a preview of subscription content, log in to check access.