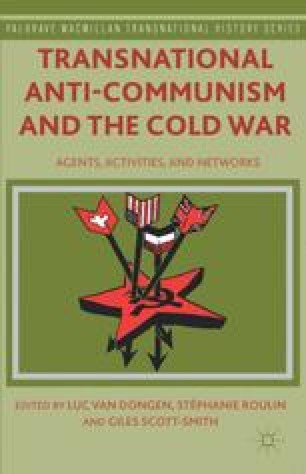 A Global Crusade against Communism: The Cercle in the “Second Cold War”

The Cercle was founded in 1952–53 by the French statesman Antoine Pinay and his close associate, the international lawyer Jean Violet.1 At the time, Pinay was prime minister and Minister of Finance, while later that decade he served as the first Minister for Economic Affairs and Finance under President de Gaulle. Violet is a lesser-known and quite shadowy figure who would nonetheless play an important role behind the scenes during much of the Cold War era. He worked for the French foreign intelligence service SDECE (Service de documentation extérieure et de contre-espionnage) from the early 1950s until 19702 and in the 1960s he also became a paid agent of the German foreign intelligence service BND (Bundesnachrichtendienst).3 The long-serving Chancellor of West Germany, Konrad Adenauer, and the prominent Bavarian politician and federal minister, Franz Josef Strauss, acted as co-founders of the Cercle. Pinay and Adenauer, the first chairmen, appointed Violet secretary general and entrusted him with the organization of the Cercle.

European Economic Community Free Agent International Terrorism Intelligence Service South African Government
These keywords were added by machine and not by the authors. This process is experimental and the keywords may be updated as the learning algorithm improves.
This is a preview of subscription content, log in to check access.