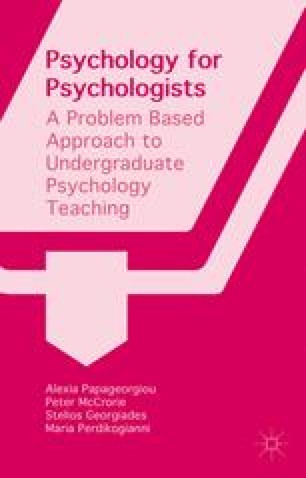 Psychology for Psychologists pp 1-18 | Cite as

The Development of Undergraduate Psychology Degrees and the Need for Change

As is the case with any scientific discipline, the exploration of psychology from a historical perspective seems to be that of development and advancement of knowledge and research methodology. However, as Shiraev (2014) so eloquently described it, this history does not necessarily follow the path of a straight line. As a result, areas of psychological investigation throughout time were considered and explained from different perspectives (Fancher & Rutherford, 2012). For example, initially psychology was regarded as part of the wider philosophical enquiry into what constitutes behaviour; at other times, it was seen as the means by which to understand the possible interrelation between body and mind. Most contemporary references to psychology consider it to be the discipline that encompasses theories, knowledge and skills that can contribute to the better understanding of human behaviour (Gross, 2010). Moreover, it is considered as the specialty that, where applicable, may help with the modification or elimination of undesirable behaviours, thereby aiding in the establishment of desirable, functional and socially acceptable behaviours. These are the general beliefs and perceptions of psychology without delving into the expectations of more specialised fields of the discipline such as clinical, educational, occupational or forensic psychology, where the demands are usually more refined and specific.

Research Methodology Undergraduate Degree Undergraduate Programme Undergraduate Level Undergraduate Curriculum
These keywords were added by machine and not by the authors. This process is experimental and the keywords may be updated as the learning algorithm improves.
This is a preview of subscription content, log in to check access.

Cite this chapter as:
Papageorgiou A., McCrorie P., Georgiades S., Perdikogianni M. (2015) The Development of Undergraduate Psychology Degrees and the Need for Change. In: Psychology for Psychologists. Palgrave Macmillan, London. https://doi.org/10.1057/9781137387653_1