Domestic Violence Laws in the United States and India: A Systematic Comparison of Backgrounds and Implications 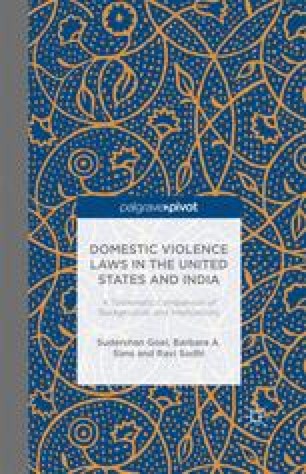 Domestic Violence Laws in the United States and India: A Systematic Comparison of Backgrounds and Implications pp 65-69 | Cite as

Domestic violence legislation is embedded within the cultures, traditions, and religious underpinnings of both India and the United States. The buildup of resources and political support for such a legislation in both India and United States has not been without difficulties. The legislature in India recognized that violence against women is presumptively caused by the social oppression of women as a subordinate group. The United States stands to learn from these examples of transformative law in the Indian domestic violence system. It is not outside United States tradition to make societal judgments and to employ such tools to push for social change. It is one legal area from which India can learn as it continues to advance in its approach to similar domestic violence situations. Currently, the legal system in India is somewhere in-between, but still favors the traditional assumption that families should be kept together.