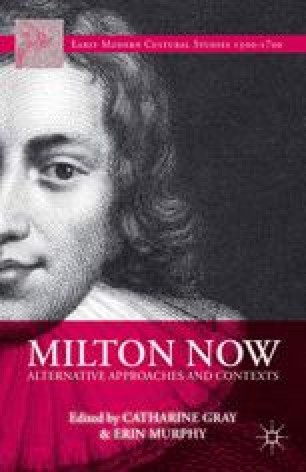 In their preface to Re-Membering Milton, editors Mary Nyquist and Margaret Ferguson write that “much remains to be done in the way of situating Milton’s presentation of gender relations historically, including, now, in relation to the various women writers of the period who have recently been discovered.”1 Nyquist’s contribution compares Milton’s treatment of gender in Genesis with interpretations offered by two of his female contemporaries, Rachel Speght and Mary Astell; she does so in order to advance the third wave feminist “attack” on “Western bourgeois” liberalism.2 While some liberal feminists posit that Milton’s epic presages gender equality by providing Eve with a “dominion” over the ordering and naming of plants that is symmetrical to Adam’s dominion over animals, Nyquist argues that this technique of “formal balance and harmonious pairing” merely “neutralizes” differences that are “ordered hierarchically and ideologically.”3 In contrast, Nyquist continues, Speght asserts that “all” are equally “serviceable” unto God, including Eve—God’s “last work and therefore the best”—while Astell interrogates the contradiction between Milton’s radical republicanism and his conservative gender politics: “how much soever Arbitrary Power may be dislik’d on a throne, Not Milton himself wou’d cry up Liberty to poor Female Slaves, or plead for the Lawfulness of Resisting a Private Tyranny.”4 Shannon Miller also contextualizes Milton’s liberalism within a broader and diverse range of women’s perspectives, confirming Nyquist’s finding that Milton’s gender politics are “distinctive and motivated” rather than ideologically neutral.5

Woman Writer Paradise Lost Reality Principle Liberal Feminist Public Peace
These keywords were added by machine and not by the authors. This process is experimental and the keywords may be updated as the learning algorithm improves.
This is a preview of subscription content, log in to check access.