Raising Spirits: How a Conjuror’s Tale Was Transmitted across the Enlightenment 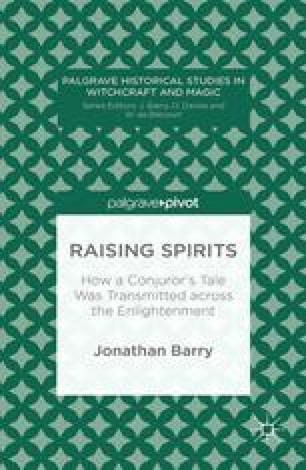 Raising Spirits: How a Conjuror’s Tale Was Transmitted across the Enlightenment pp 80-95 | Cite as

Ebenezer Sibly (1751–99) and Robert Cross Smith (1795–1832, better known as the first Raphael’), who helped to reinvent modern astrology, both identified with Thomas Perks, the self-taught astrologer from Kingswood, since Sibly spent time in Bristol and Smith was born on its outskirts and claimed a family interest in the story. Sibly’s ambivalent treatment of conjuration reflected his Swedenborgian theories and his attempt to distinguish astrology from black magic, whereas Raphael embraced unreservedly the Gothic excitement of magic, mixing fact and fiction in his astrological texts, while embodying elements of local and family folklore into his accounts.

Cite this chapter as:
Barry J. (2013) Astrologers. In: Raising Spirits: How a Conjuror’s Tale Was Transmitted across the Enlightenment. Palgrave Historical Studies in Witchcraft and Magic. Palgrave Pivot, London. https://doi.org/10.1057/9781137378941_6