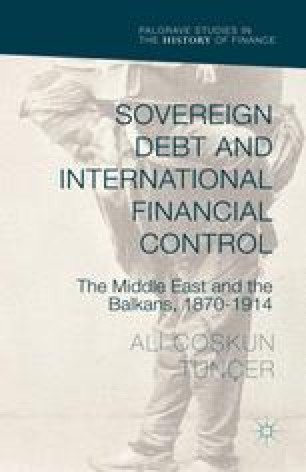 This chapter documents the functioning of the IFC in Egypt from its early years until 1914. Egypt can be considered as an exception among the cases of this book, because the IFC eventually served as a prelude to de facto colonisation of the country after the British military intervention in 1882. Therefore, unlike other cases, Egypt lost its political sovereignty and the Egyptian government had no choice but to comply with the foreign creditors. Consequently, the IFC functioned in a more complex political and institutional environment, where imperialist rivalry over controlling Egypt gave direction to the formation of a wider range of instruments of political and financial control. Our discussion, therefore, heavily draws on these unique historical characteristics in order to untangle the impact of the IFC from the broader colonial history of Egypt. In the first half of the chapter, I aim to picture the historical context and discuss the milestones in history of sovereign debt in Egypt from the initial sovereign borrowing in 1862 to 1914. In the second half, I examine the characteristics of the IFC in Egypt and try to determine the scope of its activities. A brief summary and conclusion follows to highlight the major characteristics of the IFC in Egypt during the period under study.

Public Debt Sovereign Debt Political Control British Government Dual Control
These keywords were added by machine and not by the authors. This process is experimental and the keywords may be updated as the learning algorithm improves.
This is a preview of subscription content, log in to check access.