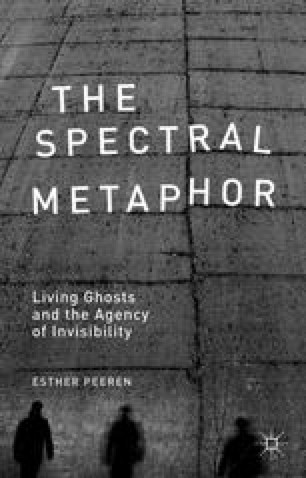 The undocumented migrant workers at the center of the two British films analyzed in this chapter, Stephen Frears’s Dirty Pretty Things (2002) and Nick Broomfield’s Ghosts (2006), are physically present and visible, yet remain unseen. They may thus be said to appear as living ghosts, with the comparison grounded primarily in the aspect of transitional invisibility, the way ghosts are not fully or consistently apprehensible. In this case, however, the lack of full visibility translates not into the desirable ability to see without being seen of Derrida’s visor effect, but into an extreme form of vulnerability. What is at stake is the disempowerment of being considered insignificant and expendable, and therefore overlooked. My analysis of the films focuses on the precise forms of invisibility this disempowerment evokes, its effects, and on the question of whether it can yield possibilities for agency, and if so, how this comes about. Is the solution to somehow assert one’s concrete presence and materiality or can one’s remaining unseen also be tactically employed to turn a disappearing, dispossessed ghost into an active haunting force, a site of spectral agency? In addition to discussing the diegetic representation of living ghosts, I consider the way the films themselves, as visual narratives participating in the genre of social realism, appeal to a rhetoric of revelation in their attempt to address the absenting of undocumented workers from British society.

Migrant Worker Social Realism Asylum Seeker Undocumented Immigrant Undocumented Migrant
These keywords were added by machine and not by the authors. This process is experimental and the keywords may be updated as the learning algorithm improves.
This is a preview of subscription content, log in to check access.