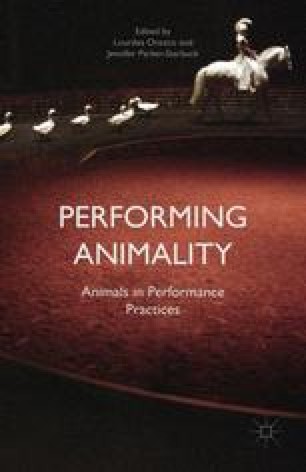 Taxidermy is not a common sight in theatre and performance contextsperhaps because theatre is dependent upon living bodies, on embodiment and presence, on interaction and exchange. A dead or lifeless arrangement (taxis) of skin (derma) seems the furthest thing from the liveliness/liveness of theatre and theatrical languages. Yet, as theatre scholar/director Herbert Blau has famously written, the theatre’s power is driven by the fact that the actor ‘can die there in front of your eyes; is in fact doing so ... of all the performing arts, the theatre stinks most of mortality’ (Blau, 1982, p. 83). The animal as positioned within the growing intersection of Animal Studies and Performance Studies is usually considered as living, disruptive, symbolic, animated, threatened. Performance Studies has focused on animals on stage historically and ethically; it has framed them as human stand-ins and as living forces to unsettle typically anthropocentric concerns. On the stage itself, the taxidermied animal has mostly acted as a prop — the trophy heads in stately stage settings or cowboy/western décor, or, on occasion, as a plot device, for example in Sam Shepard’s 2007 Kicking a Dead Horse, in which a man’s horse dies in the middle of the desert leaving him to question his life as he digs a grave for the horse. But historically, taxidermy has not been commonplace on stage.1

Polar Bear Natural History Museum Howler Monkey Animal Form Hunting Trophy
These keywords were added by machine and not by the authors. This process is experimental and the keywords may be updated as the learning algorithm improves.

Stop-time. That dying animal which enacts its own future wants to abolish time. It releases itself to its absence in something like a déjà vu. The displacement is unnerving. You are not where you were. It is like the recollection of a previous existence. The neuromental aspects of theatre are elusive.

Herbert Blau, Take Up the Bodies