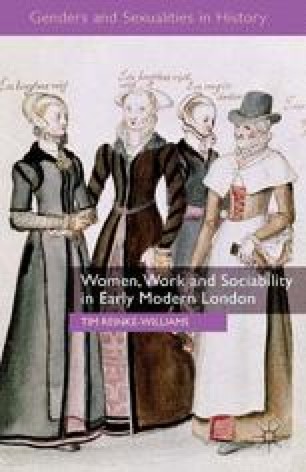 In her pioneering study of working women in seventeenth-century England, Alice Clark suggested that retailing was ‘singularly adapted to the circumstances of women’ and that being quick-witted and perceptive in urban marketplaces enabled women to maximise their profits and gain reputations as efficient and respected traders. Over 60 years later, Susan Wright reiterated the argument that it was the ‘world of casual and seasonal employment in which women were able to compete as equals with men’, and Michael Roberts noted that ‘the sale of produce from workshop or farm, and the purchase of foodstuffs or raw materials, was frequently a female preserve, and to achieve a successful bargain must have required a considerable fund of experience and knowledge of market conditions’.1 Most recently Marjorie Mcintosh has shown that working as retailers enabled women to fashion personae as honest individuals of worth and good credit since they needed to assess the reliability of customers in terms of their ability to pay and of suppliers in terms of their ability to deliver goods, as well as being judged themselves by the quality and cost of their wares.2 This chapter examines how women operated as reputable retailers by navigating the streets and marketplaces of London, opening with a discussion of how many women worked in retail across the early modern period before outlining the vocabulary used to conceptualise and define women’s work in positive terms, then concluding with a study of attitudes to women in the victualling trades, particularly in public houses.

Public House Seventeenth Century Good Repute Early Modern Period Female Staff
These keywords were added by machine and not by the authors. This process is experimental and the keywords may be updated as the learning algorithm improves.
This is a preview of subscription content, log in to check access.