The Paradox of Latina Religious Leadership in the Catholic Church 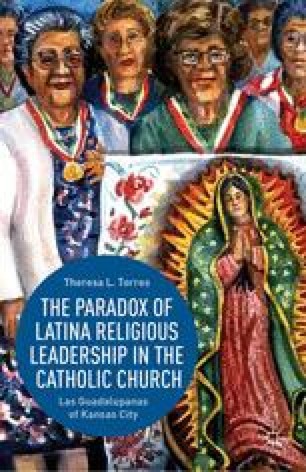 The Kansas City Westside: Home of the Shrine of Our Lady of Guadalupe

This chapter depicts the history of the Mexican and Mexican American experience on the Westside of Kansas City, particularly the progressive nature of both ethnic identity and the patterns of change, negotiation, accommodation, response, and resistance within this community. We will see that the Kansas City Westside community of Mexicans and Mexican Americans actively dealt with the difficulties they encountered due to immigrant status, poverty, exploitation, and discrimination by fostering mutual solidarity among families, friends, and neighbors over generations. This chapter also addresses the role of leadership developed in the face of external discrimination and exploitation. In that regard, the chapter does not focus specifically on the Guadalupanas, (their leadership as a group is described in chapter two), but instead addresses the significant socio-historical context that was the foundation for the development of Mexican American leadership in the Kansas City Westside. Through the creation of organizations, supportive networks, and the strength of their religious and cultural heritage, as shown in various institutions in the Westside neighborhood, this community has uniquely demonstrated strong leadership.

Ethnic Identity Kansas City Mexican Immigrant Catholic School Mexican American Family
These keywords were added by machine and not by the authors. This process is experimental and the keywords may be updated as the learning algorithm improves.
This is a preview of subscription content, log in to check access.