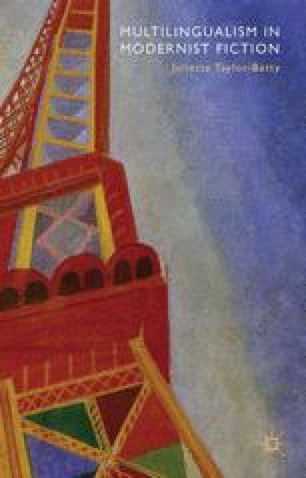 One of the most important articulations of the German-Austrian ‘Sprachkrise’ at the turn of the century, Hugo von Hofmannsthal’s ‘Ein Brief’, presents the modernist linguistic crisis as a Babelian fall. The story takes the form of a letter from a fictional Lord Chandos to Francis Bacon, explaining his cessation of literary activity. Chandos’s previous state of linguistic and literary transcendence contrasts acutely with his current condition whereby his relationship with language — and, in consequence, the world — is completely ruptured. Everything is viewed with a microscopic closeness which prevents a unified vision of the whole:

[For me, everything disintegrated into parts, those parts again into parts; no longer would anything let itself be encompassed by one idea. Single words floated round me; they congealed into eyes which stared at me and into which I was forced to stare back — whirlpools which gave me vertigo and, reeling incessantly, led into the void.2]

Target Language Source Text Foreign Word Poetic Language Linguistic Turn
These keywords were added by machine and not by the authors. This process is experimental and the keywords may be updated as the learning algorithm improves.
This is a preview of subscription content, log in to check access.