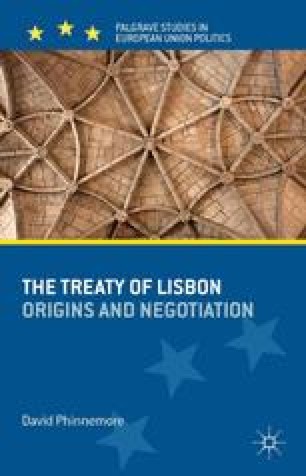 The Constitutional Treaty: Rejection and Reflection

Much has been written about the Constitutional Treaty and the implications of its rejection for European integration. Ostensibly the purpose of the Constitutional Treaty was to place a significantly enlarged EU on a new, reformed and consolidated footing, thus equipping it with the competences and institutions to meet key policy challenges in the early 21st century. In terms of reforming the EU and expanding its competences the Constitutional Treaty was no more radical than most previous amending treaties. Where it did depart from its predecessors was in its political symbolism and the constitutionalization of the EU that it furthered and consolidated (Amato et al, 2007; Christiansen and Reh, 2009; Crum, 2012), and in the explicit popular legitimacy members states endeavoured to bestow on the EU through the widespread pursuit of ratification by referendum. These were radical moves by the standards of past processes of treaty reform.

Member State European Council Foreign Minister European Parliament Dutch Government
These keywords were added by machine and not by the authors. This process is experimental and the keywords may be updated as the learning algorithm improves.
This is a preview of subscription content, log in to check access.