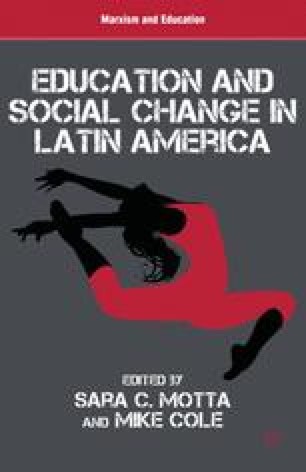 Introduction: Exploring the Role of Education and the Pedagogical in Pathways to Twenty-First-Century Socialism in Latin America

The horizons of political imagination and practice in Latin America are expanding as witnessed by the election to power of governments to the Left such as Chávez in Venezuela, Morales in Bolivia, Correa in Ecuador and Ortega in Nicaragua and the emergence of a plethora of popular social movements that are contesting and creating alternatives to neoliberal capitalism. In the praxis of this reinvention of emancipatory popular politics the role of education and the pedagogical are central (see also Motta, 2014a, b, c). We are using “pedagogical” in its wide sense here to refer not just to teaching methods but also to an articulation of educational aims and processes in social, ethical and affective as well as cognitive terms.

Social Movement Student Movement Collective Voice Popular Education Popular Movement
These keywords were added by machine and not by the authors. This process is experimental and the keywords may be updated as the learning algorithm improves.
This is a preview of subscription content, log in to check access.