The British General Election of 2015 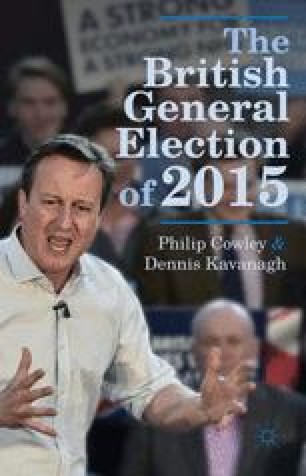 Zugzwang: The Liberal Democrats and Others

The share of the popular vote garnered by the two major parties in a post-war British general election first fell below 80% in 1970. It then dropped below 70% in 2005 and reached a record low of 65% in 2010.1 Throughout the 2010 Parliament, with the rise of UKIP, the Greens and the SNP, there was talk about how the party system was continuing to fragment, although there was no evidence that the two-party share was in further decline. What was happening, and dramatically so, was that the composition of the ‘others’ — as they used to be referred to rather dismissively — was changing. These parties matter in their own right, as the democratic choices of millions of voters, but in a close election there was also much discussion of how they would affect the outcome of the election, either by taking votes from other parties or as a result of their involvement in post-election deals. The rise of the SNP is considered separately in Chapter 5. Below we discuss the significant other parties, both those on the rise as well as those for whom 2010–15 turned out to be electoral hard times.

Election Campaign Local Election Poll Rating European Election Liberal Democrat
These keywords were added by machine and not by the authors. This process is experimental and the keywords may be updated as the learning algorithm improves.
This is a preview of subscription content, log in to check access.