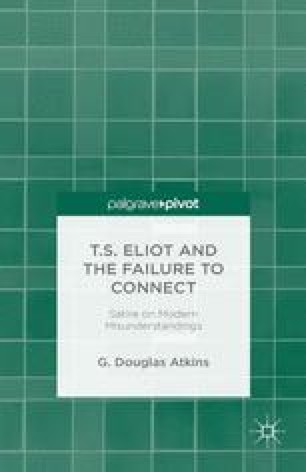 T.S. Eliot and the Failure to Connect: Satire and Modern Misunderstandings pp 49-60 | Cite as

Tradition as (Disembodied) Voice: “The word within the word” in “Gerontion”

For a while, Eliot considered appending “Gerontion” to The Waste Land as a preface. Although it is not, and should not considered as, a part of the greater work, the poem spoken by “a little old man” is more important than often realized. With another look at the seminal essays “Tradition and the Individual Talent” (also 1920) and “The Metaphysical Poets” (1923), this chapter shows how “Gerontion” represents a critique of post-Renaissance civilization with its separation of mind and body, thinking and feeling. The speaker (and title character) here emerges as a “medium” for tradition, which is Eliot’s expressed definition of the poet.

Individual Talent Title Character Selected Essay North American Literature Rhetorical Role
These keywords were added by machine and not by the authors. This process is experimental and the keywords may be updated as the learning algorithm improves.
This is a preview of subscription content, log in to check access.