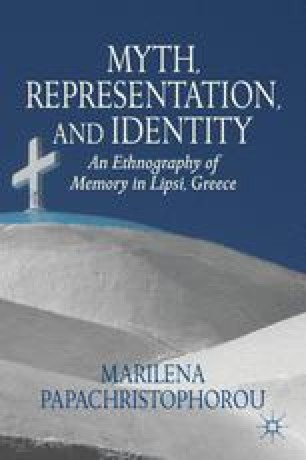 There appears to be no surprise, not a trace of fear in these encounters between pious people and saints. Awe comes later, as the miracle is told in words and becomes part of collective memory.4 As in many parts of Greece and Cyprus, each Madonna in Lipsi has her own name and Grace, no matter how the priest tries to explain that there is only one Holy Virgin with many different designations depending mainly upon her representations. The excerpt I just cited makes it clear that Virgin Mary prevails and may well be equated with other female saints.

Oral Tradition Large Perimeter Patron Saint Parish Church Greek Tradition
These keywords were added by machine and not by the authors. This process is experimental and the keywords may be updated as the learning algorithm improves.

It was God, God who did it all. Religious people could see them; blasphemous ones could not. I had this boy, a saintly kid. He’d spend his time in the church from an early age, incensing and doing all kinds of chores. Lazaros, his name was—he’s here, in the photo. So…this youth kept seeing light. He says to Yannis, “father, see that light?”—“I don’t see it, son.”—“It’s over there; look,” he says.—“Well, I can’t see it.”— “Can’t you? Well, I see it.”

He saw St Catherine, a very miraculous icon. He was very young and he was sleeping together with the other kids. Suddenly the whole room lit up and her shadow nodded to him to keep silent, to say nothing; 1 she approached him and said, “don’t speak out; I love you. Get up, come over here.” She had him get up and they went to the door. I had this little canister by the door, and she says “don’t speak out2 and come with me; I love you.” He was little, no more than ten, and he got scared; he stayed in the room where we slept [the canister in his hand], and called out at me…“Mother!” As soon as he’d said that, she was gone; he looked up, and our Lady had gone up in the icon stand. The next day he woke up crazed with fear. [ … ] Whenever he said his prayers he saw the Holy Virgin. At some point I go up;—“Mother…”—“What is it, son?”—“Tell me, who is the saint with the forks in this icon?” “It’s St Catherine-why?”—“I’ll tell you something, but say nothing to father or he’ll scold me…”—“I won’t!” And he told me his story…how the Holy Virgin approached his bed “and the whole room shone. She took me by the hand, had me get up and said she wanted to take me out and tell me something; she was going to take me somewhere, and I shouldn’t [tell anyone].”—“Oh, son, it was the Holy Virgin and she loves you,” I said, “she may have wanted to show you some treasure or something.” He was scared.3