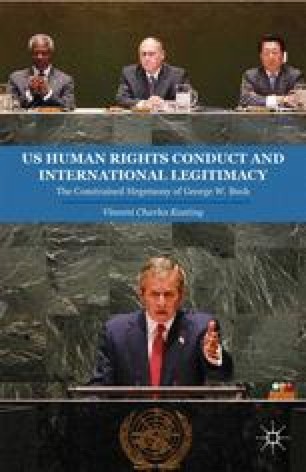 Rendition is defined as the transfer of a person, usually a suspected criminal or terrorist, from one state to another. There are several subcategories of rendition, of which extradition, or the process whereby one state surrenders a suspect to another via a predetermined formal legal process, is the most widely accepted form. Irregular or extraordinary renditions, on the other hand, are transfers where the suspect has no access to a judicial system through which they could challenge the transfer.1 As only this type of rendition is of interest in this chapter, all future references to “rendition” will refer to only irregular or extraordinary renditions. The practice of rendition is problematic not only because of its extrajudicial nature but also because rendition to some states can facilitate the torture of the rendered person. It is this latter concern that drove most of the negative reaction to the rendition program instituted by the Bush administration during the War on Terror. Prisoners had little opportunity to contest their transfer based on the principle of nonrefoulement, the doctrine that non-citizens should not be sent to other states where their basic rights may be undermined.2

Foreign Minister Bush Administration Geneva Convention Canadian Government Intelligence Service
These keywords were added by machine and not by the authors. This process is experimental and the keywords may be updated as the learning algorithm improves.
This is a preview of subscription content, log in to check access.