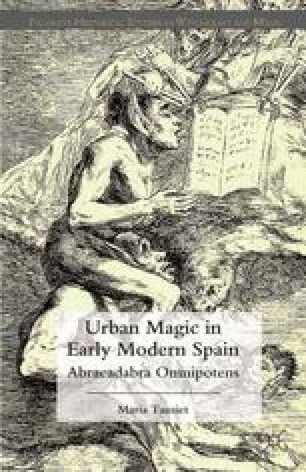 The pages of this book are populated by a motley cast of characters, all of whom found themselves living, whether on a temporary or permanent basis, in sixteenth- and seventeenth-century Saragossa. We know something of their lives because a common thread bound them together: they all had to defend themselves against charges of practising what we today would call ‘magic’, a word encompassing a whole range of activities known at the time by different names — witchcraft, sorcery, charms, enchantments, conjurations, divination, superstition and so on. Beneath all such practices lay the desire to achieve the impossible, to perform miraculous feats that contravened the laws of nature (flying, becoming invisible, transforming men and women into animals, accurately predicting the future, and other such wonders). In order to differentiate more precisely between magic and religion, it should be added that, in a Christian context, magical practitioners do not, in theory, call on God and other heavenly beings (the Virgin, angels, saints), instead addressing their invocations to supernatural forces from the opposite end of the spectrum (in other words, Satan and his cohorts).

City Wall Supernatural Force Harsh Sentence Temporary Migrant Labourer Trial Summary
These keywords were added by machine and not by the authors. This process is experimental and the keywords may be updated as the learning algorithm improves.

When she was at the washing place for those infected with the plague, they said [that] this defendant was a witch and sorceress, and that she gave enemies to some women. And when she was asked what motive they had, she said that they knew [that] her mother, Isabel Andreu, had been one such, and a minister of justice who led her to the washing place had said so. And […] she did not know [that] her mother was a witch, nor did she see her come or go by the chimney, as witches are commonly said to do.