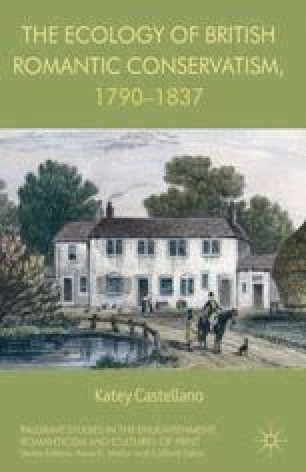 Marketed as a “peasant poet,” John Clare’s poetic identity is marked by his relationship to the natural world. His poems detail the vanishing topos of his childhood spent on common land; enclosure interrupts his walking paths with fences, cuts down beloved trees, and radically alters the visible landscape. “All my favourite places have met with misfortunes,” Clare laments in his “Autobiographical Fragments” (BH 41). Describing the fate of particular, beloved places altered by enclosure, Clare uses the word “misfortune,” a word that hints at his penchant for anthropomorphism, since “misfortune” is almost always used in connection with human social existence. Clare’s middle period poetry records his native Helpston’s natural and social history through a “language that is ever green,” which has been described by James McKusick as a unique “ecolect” that attempts to conserve what is left of his native Helpston.1

Human Life Natural World Human Freedom Liberal Conception Representational Strategy
These keywords were added by machine and not by the authors. This process is experimental and the keywords may be updated as the learning algorithm improves.
This is a preview of subscription content, log in to check access.

Cite this chapter as:
Castellano K. (2013) Anthropomorphism and the Critique of Liberal Rights in John Clare’s Enclosure Elegies. In: The Ecology of British Romantic Conservatism, 1790–1837. Palgrave Studies in the Enlightenment, Romanticism and Cultures of Print. Palgrave Macmillan, London. https://doi.org/10.1057/9781137354204_7