Domestic Servants in Literature and Testimony in Brazil, 1889–1999 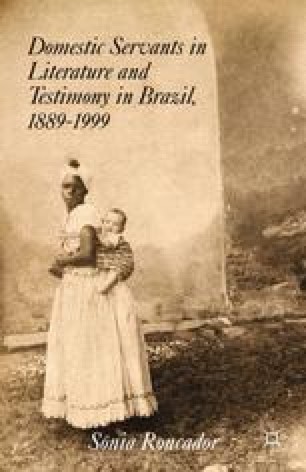 The Burdened Legacy of Domestic Servitude in Brazil
Chapter

In his introduction to one of the best accomplished studies on the literary house servant, The Servant’s Hand: English Fiction from Below, Bruce Robbins synthesizes the narrative roles in both theater and fiction that have been conventionally imposed on servant characters. In the English novel specifically, a major portion of actions and roles assigned to servants have been conditioned by a certain “repertory of comic gestures and devices,” which Robbins describes as follows: “Expository prologues, flashbacks, oracular messages, and asides; the verbal entertainment of conscious punning or unconscious bumbling; a pointed ‘doubling’ of the protagonist, for example as foil or parody; an instrumental role in complicating and resolving the action” (6). Because of their predominantly rhetorical function, in Robbins’s opinion, literary servants allow us to examine the forms and politics of social representation without caving into the temptation of treating the lowly as purely historical figures. After all, domestic servants—not only in art but also in real life—have been perceived as signs: “signs of their masters’ status” (15).

House Servant Domestic Servant Domestic Chore Cultural Mediator Literary Servant
These keywords were added by machine and not by the authors. This process is experimental and the keywords may be updated as the learning algorithm improves.

The disrespect for work, degraded among us by the deleterious influence of slavery, is one of the most evident defects of the Brazilian character… The extinction of the servile element—let us use this euphemism to avoid saying slavery—will surely bring about reduction in the number of free servants. Additionally, in the near future there will not be any houses, rich or even poor, in which the number of servants equals that of employers. This fact will force us to serve ourselves, and even serve other people if necessary—but it will not suffice to destroy the long-lasting effects of the evils of slavery.