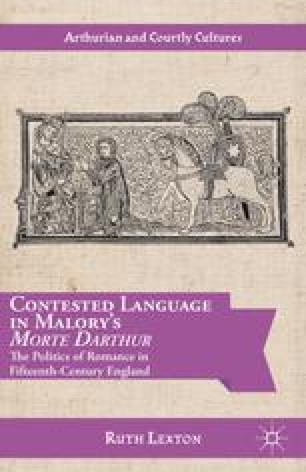 Courtesy and Service in The Tale of Sir Gareth

Lancelot’s elegy for Gareth in the final books of the Morte Darthur portrays him as a knight of the court whose martial skill is turned to the service of others: “He was passyng noble and trew, curteyse and jan- till and well-condicionde” (Works, 1199.19–20). The two knights share the combination of gracious manners and prowess in battle that attests to their chivalry. At the end of the Morte, Ector’s threnody for Lancelot employs similar language:

Courteous Behavior Round Table Domestic Service Table Manner Royal Court
These keywords were added by machine and not by the authors. This process is experimental and the keywords may be updated as the learning algorithm improves.
This is a preview of subscription content, log in to check access.