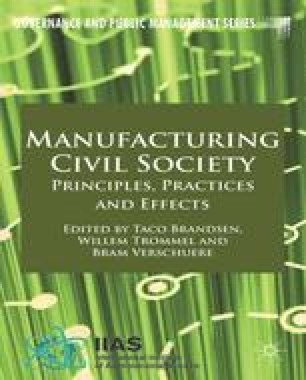 Civil society is dead; hurrah for civil society! This simple statement describes the sociopolitical debate in many modern welfare states. Traditional forms of (ideologically or religiously driven) social organisation have gradually declined. Various drivers behind this development have been identified, notably individualisation and changing life patterns, a point to which we will come back later in this chapter. But states have also arguably played a role in this. Welfare-state growth propelled an era of ‘big government’ during the 1970s and 1980s. Although the ‘crowding out’ thesis of a direct trade-off between the size of government and the size of civil society has been largely disproven (see e.g. Salamon, 1995), the collaboration between civil society and the state in the provision of social services has led many organisations to lose contact with their traditional member groups and, by implication, their original legitimacy.

Civil Society Welfare State Public Management Civil Society Organisation Institutional Logic
These keywords were added by machine and not by the authors. This process is experimental and the keywords may be updated as the learning algorithm improves.
This is a preview of subscription content, log in to check access.