Ethnographies of Uncertainty in Africa 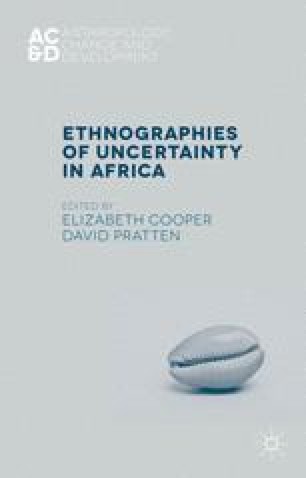 Ethnographies of Uncertainty in Africa pp 111-128 | Cite as

Social Invisibility and Political Opacity: On Perceptiveness and Apprehension in Bissau

This chapter looks at the relationship between apprehension, social invisibility, and political opacity. Building on fieldwork in Bissau, Guinea-Bissau, it illuminates the way people grasp the persistent political instability and uncertainty that characterizes the small country. Politics is, in Bissau, currently described as enigmatic and mysterious. It is seen as embedded in an environment of cloaked and concealed figures and forces that work beyond the control and grasp of ordinary people. The chapter clarifies how perceptiveness, within this context of enduring unpredictability, has come to be seen as a central social and political competence. The ability to see behind and beyond the present and presented has become a necessary power needed to secure one’s safety and well-being in a climate of insecurity. The chapter thus illuminates how people struggle to gain clarity and knowledge of the ‘invisible’ yet dangerously present forces which are understood to influence political life and argues that the prolonged period of conflict and strife in the country has generated a bearing towards the political, an apprehension which is simultaneously characterized by fear, interpretation, and anticipation. In conclusion, the chapter dwells more generally on the issue of social invisibility and argues that our attentiveness towards it is a foundational characteristic of social life.

Political Life Empirical Material Political Turmoil Prolonged State Foundational Characteristic
These keywords were added by machine and not by the authors. This process is experimental and the keywords may be updated as the learning algorithm improves.
This is a preview of subscription content, log in to check access.