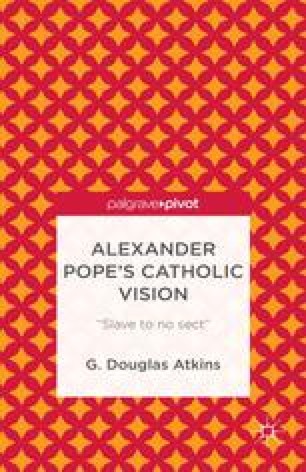 Pope’s persistent and often central concern with parts–whole also bears important religious and theological implications. Its appearance—as a form of inclusivism—in the layman’s faith tradition is of particular importance in “The Universal Prayer,” often thought to be Deistic. Commentators since Pope’s own time have charged Pope with being a “closet” Deist, although close attention to his poems alongside Deistic writing reveals critical differences. He himself resisted efforts to convert him from the Roman Catholicism into which he was born (and for which he suffered not a little). As he said to his friend Francis Atterbury, an Anglican bishop, he was, and remained, “a Catholick in the strictest sense.” Rather than Deistic, Pope’s work is “catholic”.

Natural Religion Orthodox Theology Modern Philology Theological Implication Pastoral Poetry
These keywords were added by machine and not by the authors. This process is experimental and the keywords may be updated as the learning algorithm improves.
This is a preview of subscription content, log in to check access.